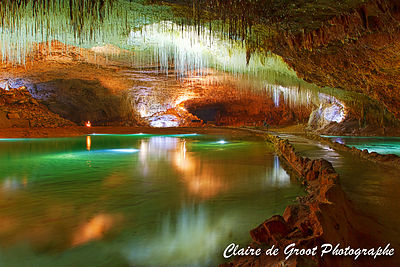 Cave photography is a daunting yet exciting concept, challenging you with extreme lighting conditions. Here are some things to consider when photographing caves.

Dress for the conditions

Caves have their own ecosystem and the temperature within can differ significantly from the temperature outside. For example the Grotte de Choranche, where the photo above was taken, has a constant temperature of 12 degrees all year round even when it’s -10 or 35 degrees outside. Caves also can be quite moist so bring a rain jacket.

Caves tend to be fairly dark making sharp, well exposed photos a bit of a challenge. If you are permitted, use a tripod to enable you to shoot long exposures, bringing out some of the details in the shadows. The shot was taken using multiple exposures, one of which had a shutter speed of 2 seconds – and this was in a fairly well lit cave! I took photos in this cave with a shutter speed as slow as 8 seconds, which is pretty hard to hold steady without a tripod.

If you’re not allowed to bring a tripod, try to rest your camera on a steady surface - your shoe if needs be– to stabilise the shot. For relatively fast slow exposures (up to 1 second), lean on someone to stabilise you further.

Use a remote trigger

Another way to improve the sharpness of your shot is to use a remote trigger. Pressing the camera trigger moves your camera a little – not convinced? Try taking a photo of the night sky on a tripod and see the resulting photo – it’s likely to be a little soft. Camera remote triggers plug in to the camera enabling you to trigger the shutter without touching the camera. It has the added benefit of letting you to step away from the camera and take the shot when the coast is clear of distractions – there’s nothing worse than someone walking in front of your camera during your shot.

Give Manual a go

For those of you who are new to using the Manual setting, here are a few basic steps. In photography it’s important to remember that there’s always a trade-off to be made when you use the camera settings.

First set your ISO – ISO sets the light sensitivity of your photo sensor. In film cameras the ISO was determined by the type of film you used to use – you could buy ISO 100 film etc depending on what you wanted to photograph). The higher the ISO you use the more light it lets in but the trade-off is that it also introduces noise into the photo. If you’re shooting on a tripod you can use a lower ISO to minimise the noise as you can shoot longer exposures to allow enough light into the camera.

Next set your desired aperture. Shooting wide open (eg f/2.8) will give you the most light however the trade-off is that you’ll have a shallow depth of field. By this I mean that whatever you focus on will be sharp but the rest will be out of focus. This can be good for portraits but isn’t so good for landscapes when you typically want everything in focus. On the other hand shooting at a smaller aperture (higher F value) eg. f/8 will bring more of the scene into focus however it will let less light in. Once again, using your tripod will enable you to shoot around F/5.6 or f/8.

Lastly set your exposure. Once you’ve set these the ISO and the Aperture the only thing that’s left is to set your exposure. Your exposure will vary depending on your lighting conditions so you may need to experiment a little and consult the histogram at the back of your camera to make sure you’re not clipping the highlights and shadows (as much as is possible).

Use HDR to bring out the detail in your photos

Have you ever wondered why your photos don’t always turn out the way you remember the scene? Our eyes are partly to blame for this as they have an amazing dynamic range (up to 20 stops) and our camera can only capture 9-11 stops of light at best. To compound this problem further, most printers can only print up to 6.5 stops of light so the finished product can look quite different with deep shadows and blown out highlights hiding the detail you know to be there.

To bring your photo closer to what you can see, many photographers use a technique called HDR (High Dynamic Range). This technique involves taking multiple photos of the same scene using different exposures (not different apertures) so that you capture the dark areas, the normal areas and the bright areas. A HDR image is typically made up of 3 photos to do this however I have taken as many as 7 photos when there were very deep shadows and bright highlights to ensure a natural transition from the darks to the lights. Some cameras have a setting to capture HDR photos by taking 3 photos and combining them in camera. For those of you without this functionality and those who want to do it themselves, you can take your shots into a program like Photoshop to create your finished product.

The photo above was created from 4 different photos and assembled in Photoshop. I’ll be writing a blog article on HDR at some stage but here’s an article from the Photoshop Café for those of you who can’t wait for my blog.

When visiting dark caves there may be creatures like olms (salamanders living in dark caves) or glow-worms who have adapted to the low light. Shining a light or using your camera flash at these creatures could damage their sensitive eyes or, in an olm’s case, their skin, which has little pigment to protect it from the light.

If you need to use your torch, keep it aimed at the ground and cover the light with some red cellophane to lessen the impact on the cave inhabitants.

Be careful where you walk and what you touch

The cave ecosystem is very fragile, not only because the animals living in the cave have evolved to survive in a stable and unchanging environment, but also because the process of creating stalactites and other cave decorations requires a very fine chemical equilibrium. Stalactites form very slowly – growing around 10cm ever 1 000 years so any damage you do to these or other cave decorations will take a very very long time to repair…

If you’re going to do some cave photos, especially in a rarely frequented or out of the way cave, bring someone with you. Make sure you only go where it is safe and let someone know where you’re going… 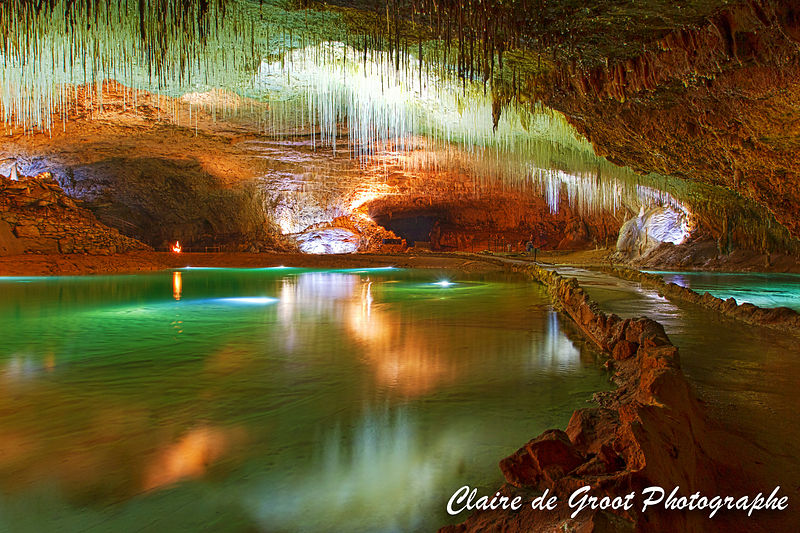